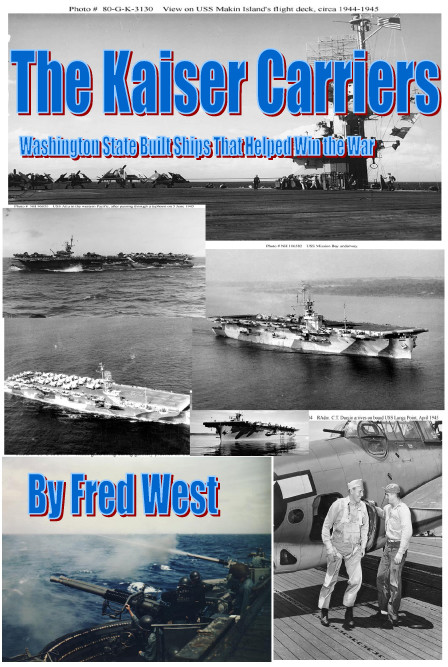 Fifty escort aircraft carriers were mass-produced at Henry J Kaiser's Vancouver Shipyard in Washington State and are dubbed the Kaiser Carriers. The Kaiser input into shipbuilding during the Second World War with yards built on the Columbia River in the which employed 40,000 and luckily were able to use hydroelectric power from two dam projects built during the Great Depression. An incredible 141 military ships were built in just 44 months: 10 Liberty variants, 30 tank landing ships (LST), 50 Kaiser Class escort carriers, 31 attack transports (APA), 12 troop transports (AP) and two floating drydocks. Earlier escort carriers had been conversions of mercantile hulls or naval replenishment ships. Henry J Kaiser, one of America’s greatest industrialists, promised the US Navy he could deliver fifty escort carriers in less than two months. His yards in Portland OR and Richmond CA had reduced construction time of the Liberty Ships from more than one year to under 90 days. The US Navy, at the time of order, was concerned that there might not be any new aircraft carriers delivered to the fleet until 1944 and was anxious to both replace early war losses and expand the force as soon as possible. This decision is truly one of the most overlooked actions of the “Arsenal of Democracy” which helped to bring the horrific combat of the Second World War to it completion. Fitting out for service was conducted in Astoria, Oregon at the mouth of the Columbia River in order to keep the building yard clear for more construction. Five were lost in battle: USS Gambier Bay sunk by gunfire from Japanese surface ships in the Battle of Samar, a part of the larger Battle of Leyte Gulf in 1944, USS St Lo was lost in this same battle by a combination of Japanese gunfire from surface ships and being struck by Kamikaze, USS Liscome Bay was sunk by a Japanese submarine torpedo just three months after commissioning in 1944, USS Ommaney Bay was sunk by bombs from a Japanese aircraft in 1945, USS Bismarck Sea sunk by Kamikaze in the Western Pacific in 1945. One of the most famous actions of this class was the capture of German U-505, which is now on display in the Museum of Science and Industry in Chicago, by USS Guadalcanal and escorts in 1944 during the Battle of the Atlantic. After VJ Day, the surviving ships in the best material condition were retained for possible future US in mothballs, but most had been sold for scrapping by the early 1960s. This class compromised one third of US carriers in World War II. Six were originally to be transferred to the British under Lend-Lease, but the speed of their construction meant all were retained for US service. Sadly not one of these ships survive today as a museum ship. Their small size made them ideal for tasks such as hunting U-Boats in the Atlantic and support of landing operation in the Pacific as well as carrier landing training and aircraft transport. These ships, a tribute to American industrial and military capability, are brought together in this illustrated book which has the service history of each ship. Paperback 6 x 9 inches.